Sales as a profession is one of the most hated professions, it is right up there with HR and administration. In this post, we will explore why is that and how to remedy it.
As a student, you are taught these idealistic values like, Always Be Closing (ABC’s of selling), a sales person never fails, well… I have news for you. Everyone wants to sell and no one wants to fail. If nothing works hard sell, well, those were the days of yore, my friend. In today’s competitive world, hard selling will only take you and your company so far. And closer to disaster.
Hard selling works only in cases of promotional products like a limited edition car. Hard selling does not work when it comes to software. When you try to hard sell your ‘brilliant’, ‘one of a kind’, ‘more buzzword’s product, what you are essentially doing is being one the millions who irritates everyone.
Let me tell you that you are another sales rep among the millions, who is only ending up annoying more people and increasing the list of people who hate sales reps.
Let’s begin by answering a simple question!

Why are sales people hated so much?

It’s because of a few things we all do wrong and that need to change, now.

– Yes, I know ABC’s the mantra you’ve been taught since the early days of getting into sales. But, wait and think; can you close a deal soon after the product demo when you have a 30 day trial in place?
Go step by step. Build a pipeline of prospects and you’ll then see regular closures because of your past work. Your prospects will love you for an organized approach and for not following up with them every alternate day.

2. Listen and don’t talk too much 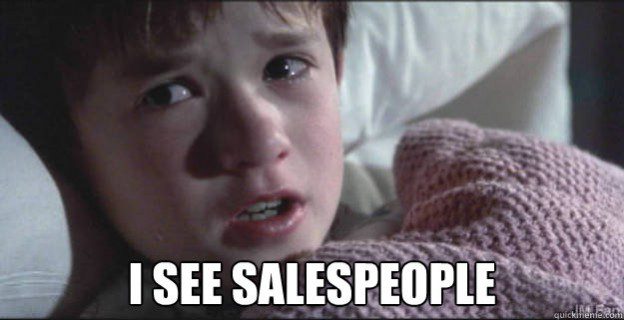 – Stop pushing for what a customer doesn’t want. Try and figure out the matching needs of the customer and suggest accordingly. Stop selling another product which brings in more revenue.
And don’t think your prospects don’t know that you’re trying to sell, when you think otherwise. Stop being pushy and spare them from the horror of your follow ups!
Has it ever been that prospects never respond to you, post an initial call or discussion. Don’t even answer your emails? Ever thought of the reason? Well, now you know.
It’s okay to lose a sale and build a rapport with a prospect than to sell a wrong product, lose the customer in a month, and earn a bad name later (may be even publicly). 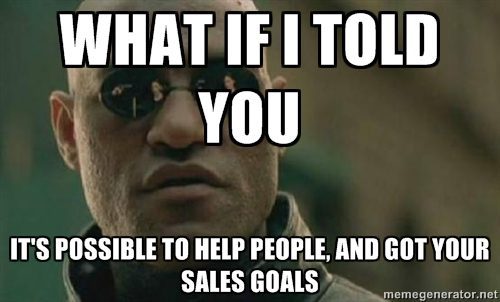 – Educate the prospects. After all, they are your internal champions to convince the other decision makers involved in the buying cycle whom you might not be able to get in touch directly.
If a prospect understands the underlying value of your product, more than half the job is done!

Let’s accept that in sales, ‘You win some and you lose some’.
If your product doesn’t genuinely fit the needs of a prospect, it’s okay to let them go. Just make sure that you give enough information about the value your product can add, and believe me, you will see prospects coming back to you some time later or referring other people to you, in case they don’t find a better fit.
There have even been instances where I’ve referred some prospects to a competitor, only because I found they were genuinely a better fit.
1 out of 1000 sales reps would do that. Try it, works wonders! 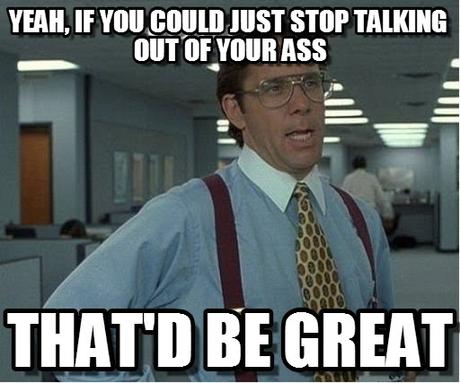 If your product doesn’t have a feature that your competitor does, accept it. Do not make false promises based on the product road map and let the customer success/account team suffer.
You might end up making a sale, however, the customer will terminate usage soon, blame you and hate your company for wasting his/her time and resources.
At other times, your customers might know more than you about your offering. They might be reading one of your latest blogs, while on the call with you. They’ll only hate you more for giving wrong information.

A critical part in making a sale is the initial support to be provided, during the trial period OR the pilot. Try answering your prospect’s queries within minutes and see the ‘Awe’ on their faces. Sometimes, when you and your competitor are equals, with minor differences, you will close the deal only because of a better support. Been there, done that!
I know, we as Sales Reps, start salivating at the sight of a lead hitting our CRMs OR on our websites. But wait and think, as per your process.
1. Are we doing justice by calling in every single lead, when a simple email can do the job?
2. Are we overdoing some stuff instead of sticking to the basics?
3. Is there a way more deals can be closed without even getting on call? (Depending from business to business) Ever even thought of that?
Hope following these, we can start creating a community with more AWARE and less hated sales people 🙂
Please feel free to share your thoughts and feedback in the comments below.